Shaping attitudes means staying abreast of news and outreach opportunities in the world of disability employment. Start by subscribing to the Campaign for Disability Employment’s (CDE) e-alerts and following us on Facebook, Twitter, LinkedIn and Instagram. (Please read our Social Media User Agreement which governs all official Campaign for Disability Employment accounts on social media platforms and websites.)

In addition, check out the CDE Blog, which features compelling posts from a wide range of guest contributors.

Below you’ll find our latest news and announcements, as well as other news sources you might consider following.


The Campaign for Disability Employment (CDE) and its funding entity, the U.S. Department of Labor’s (DOL) Office of Disability Employment Policy (ODEP), care about the health and safety of America’s workers, at all times. In response to the evolving coronavirus (COVID-19) outbreak, DOL has compiled a list of resources to help. Read the DOL press release and access DOL’s coronavirus web page.


This year marks 30 years since a major milestone in our nation’s history—the signing of the Americans with Disabilities Act (ADA). In honor of ADA30, the Campaign for Disability Employment (CDE) has released its “Who I Am” public service announcement (PSA) as a national radio PSA. Originally launched in 2014 as a television spot, “Who I Am” features nine real people with disabilities—some obvious and some not—sharing how they describe themselves, from personal interests to family relationships to occupations. Among them is film and television actor RJ Mitte, best known for his roles in AMC’s “Breaking Bad” and ABC Family’s “Switched at Birth.” Rather than be defined by disability, these individuals are the sum of their many life roles—which includes working in jobs they love. To learn how to air this and other CDE PSAs in your local market, contact the CDE. 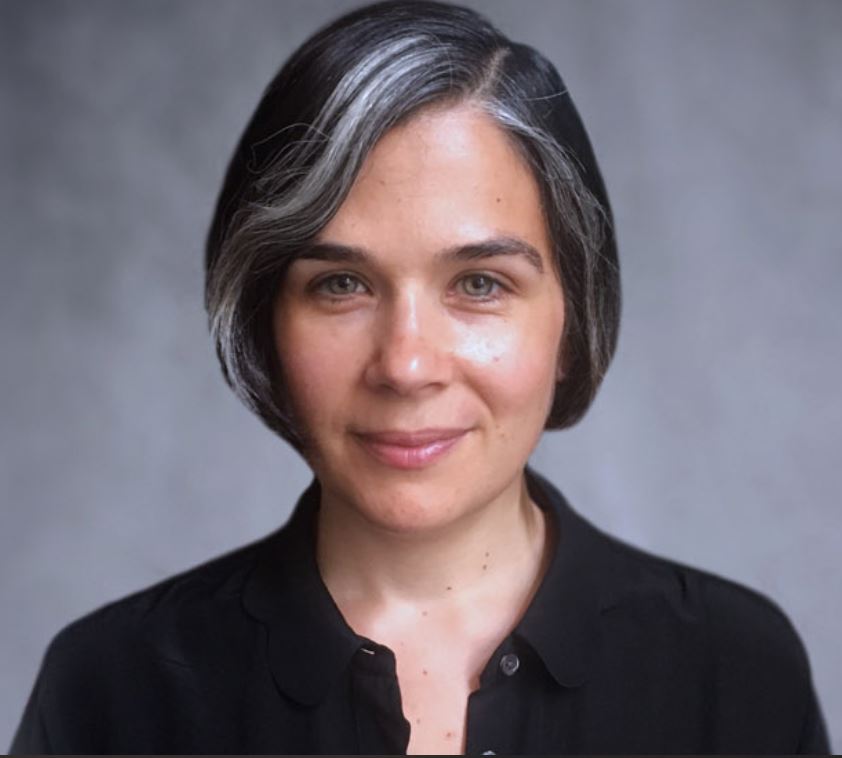 CDE What Can You Do? @CDETweets
2 days ago
Many thanks to @KyRETAIN for sharing information about the CDE & our PSAs! KY is one of 8 states participating in @USDOL’s & @SocialSecurity’s Retaining Employment & Talent After Injury/Illness Network (RETAIN). #PhotoFriday https://t.co/F1teKMGD1a https://t.co/wNkpzoWheM
View on Twitter 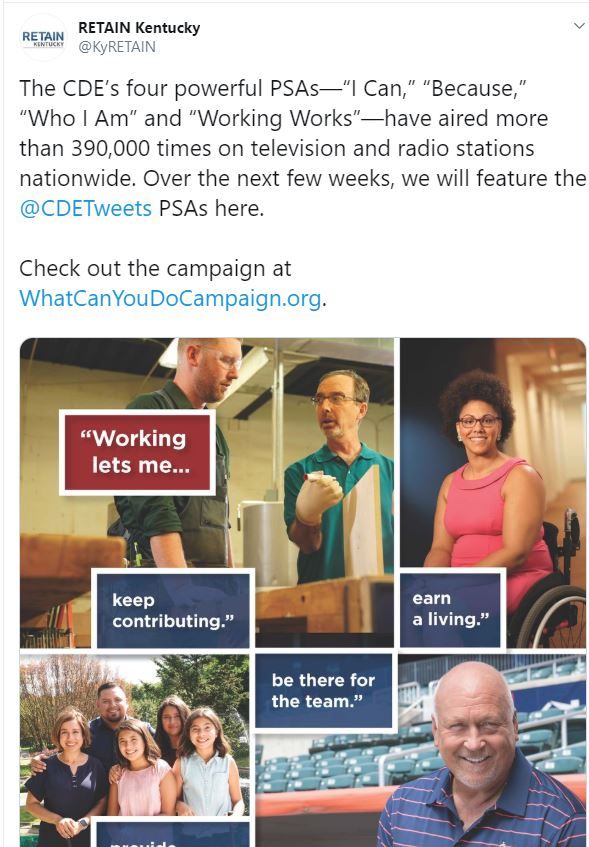 CDE What Can You Do? @CDETweets
3 days ago
In honor of #WorldAutismDay, check out this video from @FreddieMac to learn why the company is committed to hiring people with disabilities, including #autism. #neurodiversity. https://t.co/rn9KvTlWTm https://t.co/5Pn9NQRPbA
View on Twitter
0
2

CDE What Can You Do? @CDETweets
3 days ago
#DeafHistoryMonth is celebrated from 3/15 - 4/15 to recognize milestones in Deaf history. Learn more in this blog post from CDE Supporter @chooseworkSSA. https://t.co/ieKgt7wldp https://t.co/EKiCxV7YHK
View on Twitter 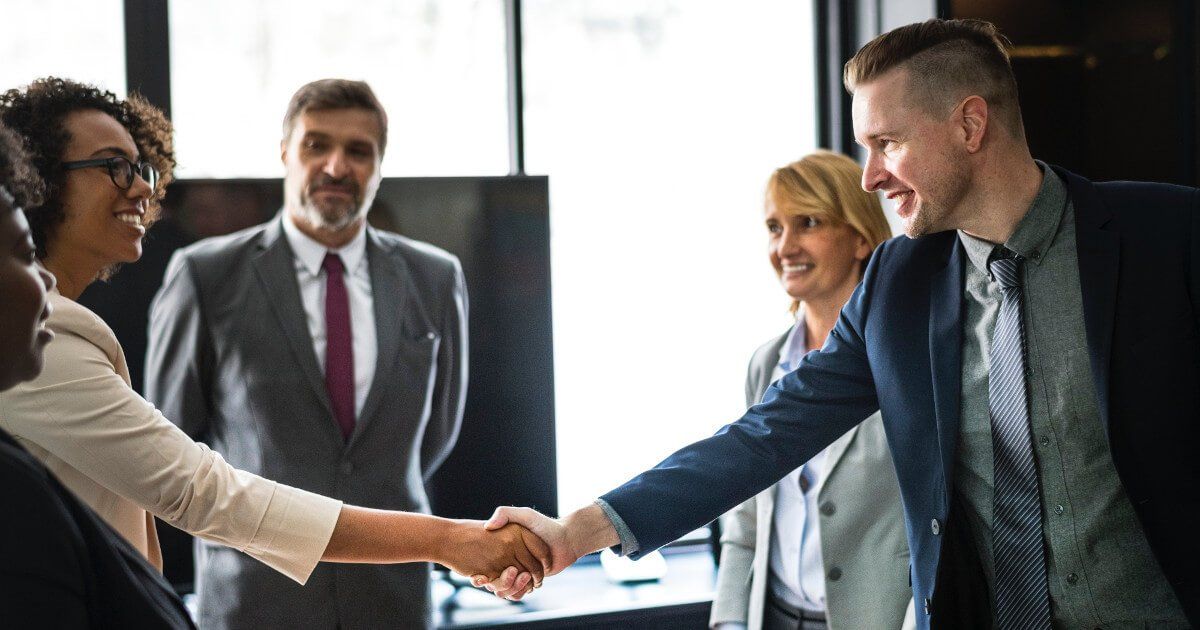 CDE What Can You Do? @CDETweets
3 days ago
This article from the @ChiefExecGrp explores the ins & outs of starting a targeted employment program for people with #autism & other neurodiverse conditions. https://t.co/rWL1y8cdxu https://t.co/K4Msw9xEC3
View on Twitter 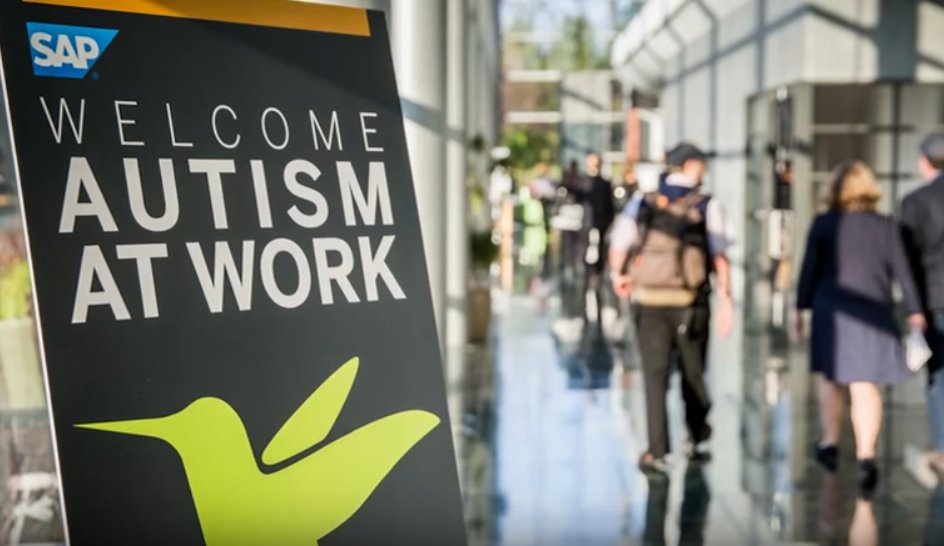 CDE What Can You Do? @CDETweets
4 days ago
Check out @AskEARN's special edition newsletter about #COVID19. https://t.co/BDFWkjgpKp
View on Twitter
1
1

The Campaign for Disability Employment's (CDE) What can YOU do?” (WCYD) initiative is a positive outreach initiative aimed at increasing the employment rate of people with disabilities by challenging common misperceptions. It sends a clear message: people with disabilities want to work and their talents and abilities benefit businesses both financially and organizationally. By implementing good workplace practices, such as maintaining a flexible and inclusive work environment, businesses can capitalize on the talents of qualified people with disabilities. All it takes is recognizing the value they add to the workplace and fostering a work culture welcoming of the talents of all individuals. We encourage organizations of all sizes and in all industries to join our effort. Vist WhatCanYouDoCampaign.org to learn more! Contact - info@WhatCanYouDoCampaign.org

Campaign for Disability Employment2 days ago
Many thanks to Retain Kentucky for sharing information about the CDE and our public service announcements (PSAs)! Kentucky is one of eight states participating in the U.S. Department of Labor and Social Security Administration's Retaining Employment and Talent After Injury/Illness Network (RETAIN), which explores stay-at-work and return-to-work strategies. #PhotoFriday Image Description: Screen capture of a RETAIN Kentucky tweet about the CDE's public service announcements. https://buff.ly/2JlbFqe

Campaign for Disability Employment3 days ago
This article from the Chief Executive Group explores the ins and outs of starting a targeted employment program for people with autism and other neurodiverse conditions.

Putting Autism To Work
Hiring workers with autism can be a boon for productivity. But CEOs leading the charge should address legal issues in the very early stages of planning.
chiefexecutive.net
9    View on Facebook

Campaign for Disability Employment4 days ago
Anthony Collins noticed a lack of vending machines in his community, so he decided to started his own business, AC Vending. Anthony, who has a developmental disability, receives support services from the Pioneer Center / Ross County Board of Developmental Disabilities to help grow his business and learn new skills. #WhatCanYouDoWednesday

Passions into a reality: small local business created after one simple idea
Anthony Collins has always been full of ideas, and full of passion. He recently started his own business after turning one concept into a reality.
chillicothegazette.com
8    View on Facebook

Campaign for Disability Employment5 days ago
New to teleworking? This article from the Washington Post offers advice from people with disabilities who are experienced teleworkers to help employees and their managers adjust to working remotely. #TuesdayTips

Disabled people have worked remotely for years, and they’ve got advice for you and your bosses
Employees with accommodations are offering tips for working at home, avoiding isolation and more.
washingtonpost.com
11    View on Facebook