Looking Closer: Raising Expectations of People with Disabilities Helps Us All Move Forward 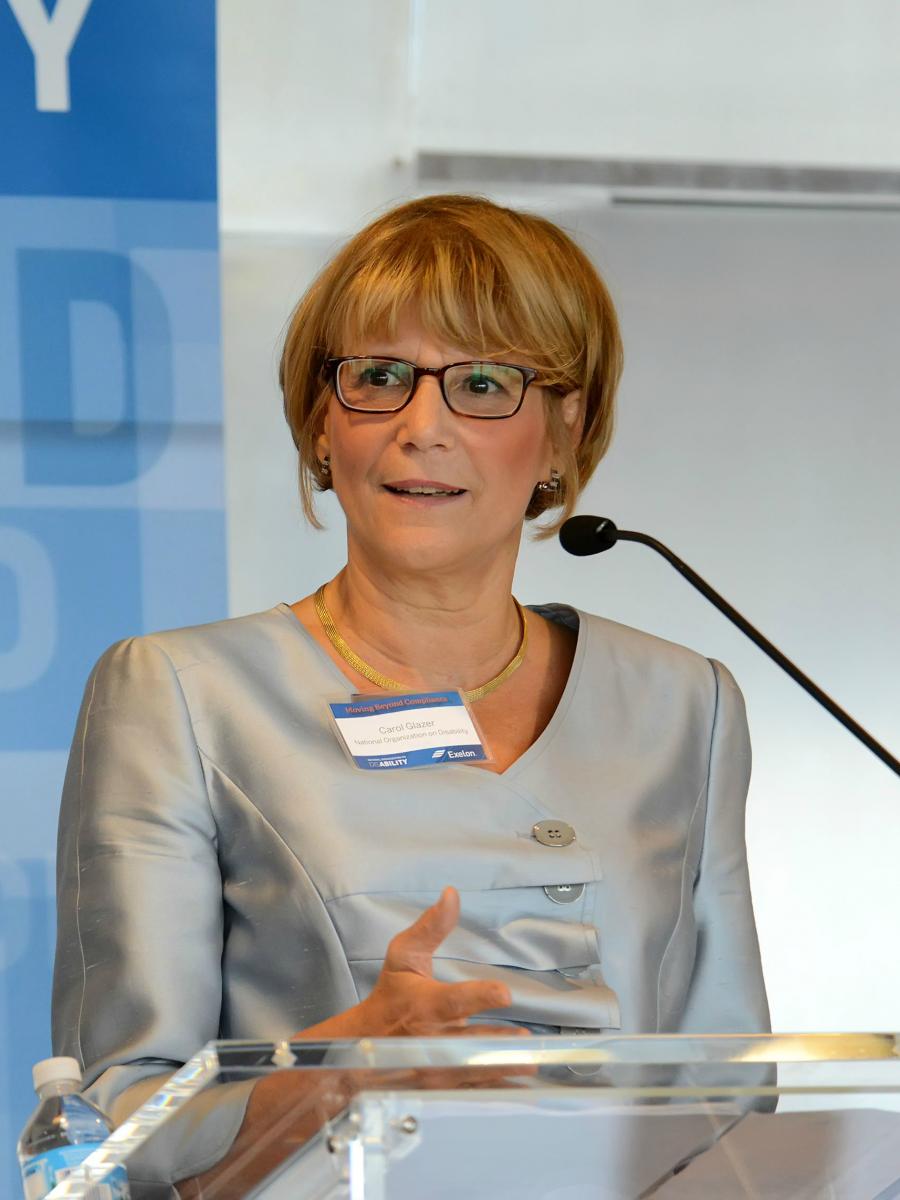 Looking Closer: Raising Expectations of People with Disabilities Helps Us All Move Forward
By Carol Glazer

It is not unusual for waiters and waitresses to look only briefly at my son Jacob before turning to ask me what he would like to eat. With a shrug, I almost always say the same thing: Ask him.

Jacob, 26, has apparent physical and cognitive disabilities. His arms sometimes hang awkwardly, and his eyes can wander. His speech isn’t always fluid. To many, it is the appearance of someone lacking agency—someone who needs help. It’s an appearance that belies a keen sense of observation, strong personal desires and a quick wit. Jacob knows what he wants. Ask, and he’ll tell you.

When meeting him, even people who interact regularly with people with disabilities tend to speak at enhanced volumes and reduced speeds. When this happens, Jacob will ask them why, and, ironically, check that they are okay (his emotional intelligence and sense of humor have always outpaced those of others his age). These exchanges are mostly innocuous and even funny, if not a bit awkward for the would-be do-gooders. But they reveal a worrisome truth about our society.

The term “stigma” is often used in the context of discrimination. And although stigma is certainly problematic, it is not always actively pernicious. Those waiters are not avoiding Jacob to be insulting. They are trying to spare him embarrassment—and perhaps themselves some discomfort. But in doing so, they rob him of his voice and his volition. For whom is that good?

Society has certain expectations of people: expectations of education, of employment, of contributions to the common good. But, for totally outdated and cynical reasons, those expectations do not typically extend to those with disabilities, especially when it comes to work. Rather, it’s seen as a miracle that they get out of bed in the morning.

Smart people—and smart businesses—do not subscribe to this tyranny of low expectations, however. Rather, they know that including people from all walks of life, with different perspectives and experiences, is the key to success. People with disabilities are above all problem solvers; in the workplace, this translates into innovative thinking. It’s no coincidence that businesses that excel at disability inclusion—for instance, those recognized as National Organization on Disability (NOD) Leading Disability Employers™—are among the nation’s, and in fact world’s, most successful organizations.

As president of NOD, I have the privilege of working with these companies, as well as those at different points in their disability inclusion journeys. Those more towards the beginning often have the same question: What kinds of jobs can people with disabilities do?

There are more than 50 million Americans with disabilities in the United States today, constituting a remarkably diverse group that includes people with Autism, asthma and arthritis, as well as cancer, depression, dyslexia and myriad other conditions. They are black and white, young and old; they live in Brooklyn, San Francisco and Iowa City. No two people have the same talents or interests—regardless of disability status. So, what kind of jobs can people with disabilities do? Any jobs that people can do.

The frequency with which this question is asked was a significant driver for NOD in launching the Look Closer campaign, as well as joining the Campaign for Disability Employment. Through these initiatives, we are working to recast Americans with disabilities as a capable, untapped workforce, with new terminology and new archetypes. The key is sharing their stories. Some of the individuals featured in our Look Closer campaign are low-skilled, hourly workers. Others are senior managers and C-level leaders. In almost every case, the individual’s disability played either no role in their career whatsoever or created competitive advantages. It turns out, disability has very little to do with ability.

So, have people with disabilities failed to exceed the low bar set for them? Or has society failed to set the bar high enough? It’s time for us all to look closer at our beliefs, expectations, and yes, our stereotypes.

For more information about the Look Closer campaign and how individuals and employers can get involved, visit nod.org/lookcloser.

About the Author
Carol Glazer is the president of the National Organization on Disability (NOD), a CDE member organization.